Between 1945 and 1985 the annual soybean harvest increased eleven-fold. Today, America grows around three billion bushels of soybeans and accounts for more than one-third of the world’s soybean crop. It represents a $16 billion crop that strengthens our country’s balance of trade while providing a domino effect of job growth and prosperity.
Our candle wax is created with pure, 100% natural soybeans and then it is enhanced with carefully selected botanical oils.

Since our philosophy is to produce products that are good for people and the environment, our wax comes from soy beans grown in rich fertile soils and is turned into biodegradable soy wax that is a renewable, sustainable wax that encourages growth with out depletion. Our wax is 100% vegetable, guaranteed! There are no beeswax or petroleum products hidden in it. The wax is FREE of pesticides, herbicides and Genetically Modified Material.

SO JUST HOW DOES WAX COME FROM A BEAN?
It all starts with a 60 pound bushel of soybeans. These are crushed and pressed to separate the soybean meal from the oil. In each 60 pound bushel, 49 pounds of soymeal and 11 pounds of oil are produced. The 49 pounds of soymeal which is very high in protein is processed into animal feeds and foods for human consumption such as soy milk, tofu, and texturized soy protein. The 11 pounds of soybean oil is then made into a wax by a process of partial hydrogenation of the oil. 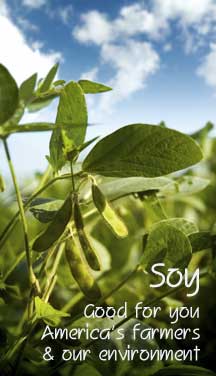 SOY WAX HAS MANY BENEFITS AND IS A GREEN ALTERNATIVE:

Paraffin candles are made from petroleum. Soy wax burns cleaner with no petroleum soot or carcinogenic emissions.

Soy wax candles last longer since they burn at a slower rate.

Soy wax cleans up with hot water and soap so the containers can be reused for another purpose.

Soy wax melts at a lower temperature and so is safer for workers and lowers energy costs in the manufacturing process.

Made from American-grown soy beans, Soy wax supports the US economy instead of foreign oil conglomerates.